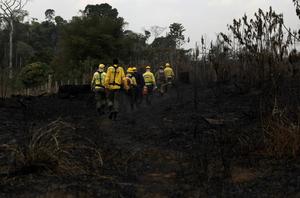 Firefighters walk a burned tract of the Amazon jungle during an operation in Porto Velho on Sunday.

The fight to quell the blazes will be waged not only in one of the most inhospitable places on Earth — an expanse so vast, dense and remote that many of the fires can be reached only by foot — but also in a country where the president is openly antagonizing the donors who are trying to help.

The twin challenges — one political, the other environmental — were feeding each other Monday, further muddying a response that activists and analysts stress must be broad and swift to temper what could be significant damage to the world’s most important forest.

The fires are not traditional in any sense. Most have been set intentionally, by farmers and loggers clearing land. The ground is not arid but sodden. And it’s not one big blaze but hundreds, many separated by wide distances. It will require a well-organized effort, analysts say, to stamp out the fires — and make sure they stay out.

But a personal dispute between the presidents of Brazil and France threatened to overshadow the danger facing the Amazon, which is regarded as essential to curbing global warming.

Over the weekend, Brazilian President Jair Bolsonaro appeared to mock the appearance of French President Emmanuel Macron’s wife. And when Group of Seven member states pledged $22.2 million Monday to fight the fires — an effort led by Macron — Bolsonaro took offense.

“We cannot accept that a President, Macron, issues inappropriate and gratuitous attacks against the Amazon,” he tweeted. “Nor that he disguises his intentions behind an ‘alliance’ of the G-7 countries to ‘save’ the Amazon, as if it were a colony or no man’s land.”

Cap. Mario Vergotti with the Rondonia State firefighters in Brazil said Aug. 26 that the numerous small fires blazing in the Amazon present a challenge. (The Washington Post)

Speaking to reporters, Bolsonaro questioned the donors’ intentions: “Would someone help someone else … without expecting anything in return?”

Brazilian media reported late Monday that the government had decided to reject the G-7 offer. Brazilian officials contacted by The Washington Post late Monday could not immediately confirm the decision.

“For him to have made incredibly disrespectful comments about my spouse — what can I say to you?” Macron said. “It is sad. It is sad. But it is sad first of all for him and the Brazilian people.”

Bolsonaro campaigned last year on promises to open up the Amazon to development. Since his inauguration in January, deforestation — much of it illegal — has surged. Scientists warn that the forest is approaching a tipping point — between 20 percent and 25 percent deforestation — when the damage could be irreversible, and large swaths could transform into savanna.

Perhaps the clearest manifestation of the degradation is the most elemental: fire. The number of blazes in the Amazon states has risen by more than 75 percent this year, and the rate at which they’re scorching the earth has doubled.

After farmers and loggers hack down the forest, the easiest way to dispose of the foliage is to let it dry out in the sun for months — then set it ablaze. Smoke from these fires blanketed distant cities last week, grounding flights and sending patients to hospitals with smoke inhalation.

Countries in Latin America, the Middle East and beyond have offered money and firefighters. But leaders in Brazil, a former Portuguese colony long wary of foreigners’ interest in the Amazon, have expressed concern over what Bolsonaro has described as a “colonialist mentality.”

Scientists, meanwhile, have been more preoccupied with the practical concerns of the task before firefighters.

The Bolsonaro administration has set aside $7 million to combat the fires and readied 44,000 troops to deploy. Four hundred have been sent to the northern state of Rondonia, where 4,600 fires have burned this month, and the air force has launched planes to shower the flames.

The job ahead won’t be easy.

“We’re talking about battling what will be hundreds of fires burning simultaneously, beyond any road network, distributed across thousands of miles,” said Douglas C. Morton, chief of the Biospheric Sciences Laboratory at NASA’s Goddard Space Flight Center. “It’s quite a challenge to mobilize resources for one of these fires, but to simultaneously track down and put out a number of these sorts of fires … demands essentially a full press.

“You really do need thousands of people.”

The first challenge is just reaching the fires, many of which occur hundreds of miles from the forest’s edge. A Brazilian air force plane waits Saturday to collect bags of water to fight fires in the state of Rondonia. (Isac Nobrega/Agencia Brazil/EPA-EFE/Shutterstock)

“That’s why there is a huge focus on prevention,” said Paulo Brando, a professor of physical sciences at the University of California at Irvine who has spent years working on the issue. “Once these fires spread in gigantic areas, they are very hard to contain.”

The central paradox of the fires, however, is that they can wreak significant damage without being all that strong. When compared with the towering infernos that are visited upon California every year, the Amazon fires are minuscule. Almost all that have burned so far in 2019 have been what is considered ­low-intensity — barely knee-high — a Level 1 on a scale of 3.

But because of the fragility of the environment, Morton said, the fires are devastating. The Amazon rainforest, soaked in hundreds of inches of rainfall annually and home to some of the wettest land on Earth, simply isn’t able to withstand them.

“The fires are unremarkable from a standpoint of the intensity of fire, but equally remarkable to the damage it can do to the Amazon,” Morton said. “The fire is enough to kill most of the trees because they’re not adapted to fire.”

On Monday, some questioned whether the resources so far marshaled were enough for the challenge.

The $22.2 million donated by the G-7 countries would go fast, said Rick Swan, an official with the International Association of Fire Fighters.

“For a reference point, the Tubbs Fire in 2017 [in Northern California], the firefighting costs alone were $100 million,” he said.

And the Amazon fires this year might only be getting started.

Ane Alencar, the director of science at Amazon Environmental Research Institute, said more were almost certainly on the way. Those burning now were lit using trees cut in May and June. An area amounting to half the size of Rhode Island was cut down in July alone, and those trees have yet to spark.

“We are still waiting,” she said. “The peak of the burning season in the Amazon is around September.”