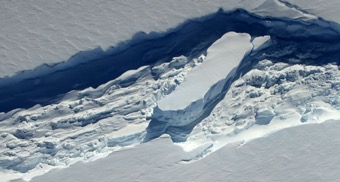 Ice melange, a combination of ice shelf fragments, windblown snow and frozen seawater, can act as a glue to fuse large rifts in floating ice in Antarctica. Researchers at UCI and NASA JPL found that a thinning of the substance over time can cause rifts to open, leading to the calving of large icebergs.

Irvine, Calif., Sept. 27, 2021 – Glaciologists at the University of California, Irvine and NASA’s Jet Propulsion Laboratory have examined the dynamics underlying the calving of the Delaware-sized iceberg A68 from Antarctica’s Larsen C ice shelf in July 2017, finding the likely cause to be a thinning of ice melange, a slushy concoction of windblown snow, iceberg debris and frozen seawater that normally works to heal rifts.

In a paper published today in Proceedings of the National Academy of Sciences, the researchers report that their modeling studies showed melange thinning to be a major driver of ice shelf collapse. The circulation of ocean water beneath ice shelves and radiative warming from above, they say, gradually deteriorate ice melange over the course of decades.

As ice shelves are thought to buttress and prevent land-borne glaciers from more rapidly flowing into the ocean, this new knowledge about rift dynamics illuminates a previously underappreciated link between climate change and ice shelf stability.

“The thinning of the ice melange that glues together large segments of floating ice shelves is another way climate change can cause rapid retreat of Antarctica’s ice shelves,” said co-author Eric Rignot, UCI professor of Earth system science. “With this in mind, we may need to rethink our estimates about the timing and extent of sea level rise from polar ice loss – i.e., it could come sooner and with a bigger bang than expected.”

Using NASA’s Ice-sheet and Sea-level System Model, observations from the agency’s Operation IceBridge mission, and data from NASA and European satellites, the researchers assessed hundreds of rifts in the Larsen C ice shelf to determine which ones were most vulnerable to breaking. They selected 11 top-to-bottom cracks for in-depth study, modeling to see which of three scenarios rendered them most likely to break: if the ice shelf thinned because of melting, if the ice melange grew thinner, or if both the ice shelf and the melange thinned.

Instead, the model showed that a thinning ice shelf without any changes to the melange worked to heal the rifts, with average annual widening rates dropping from 79 to 22 meters (259 to 72 feet). Thinning both the ice shelf and the melange also slowed rift widening but to a lesser extent. But when modeling only melange thinning, the scientists found a widening of rifts from an average annual rate of 76 to 112 meters (249 to 367 feet).

The difference, Larour explained, reflects the different natures of the substances.

“The melange is thinner than ice to begin with,” he said. “When the melange is only 10 or 15 meters thick, it’s akin to water, and the ice shelf rifts are released and start to crack.”

Even in winter, warmer ocean water can reach the melange from below because rifts extend through the entire depth of an ice shelf.

“The prevailing theory behind the increase in large iceberg calving events in the Antarctic Peninsula has been hydrofracturing, in which melt pools on the surface allow water to seep down through cracks in the ice shelf, which expand when the water freezes again,” said Rignot, who is also a NASA JPL senior research scientist. “But that theory fails to explain how iceberg A68 could break from the Larsen C ice shelf in the dead of the Antarctic winter when no melt pools were present.”

He said that he and others in the cryosphere studies community have witnessed ice shelf collapse on the Antarctic Peninsula, stemming from a retreat that began decades ago.

“We have finally begun to seek an explanation as to why these ice shelves started retreating and coming into these configurations that became unstable decades before hydrofracturing could act on them,” Rignot said. “While the thinning ice melange is not the only process that could explain it, it’s sufficient to account for the deterioration that we’ve observed.”

Joining Rignot and Larour on this NASA-funded project were Bernd Scheuchl, UCI associate project scientist in Earth system science, and Mattia Poinelli, a Ph.D. candidate in geoscience and remote sensing at Delft University of Technology in the Netherlands.

About the University of California, Irvine: Founded in 1965, UCI is the youngest member of the prestigious Association of American Universities and is ranked among the nation’s top 10 public universities by U.S. News & World Report. The campus has produced three Nobel laureates and is known for its academic achievement, premier research, innovation and anteater mascot. Led by Chancellor Howard Gillman, UCI has more than 36,000 students and offers 224 degree programs. It’s located in one of the world’s safest and most economically vibrant communities and is Orange County’s second-largest employer, contributing $7 billion annually to the local economy and $8 billion statewide. For more on UCI, visit www.uci.edu.