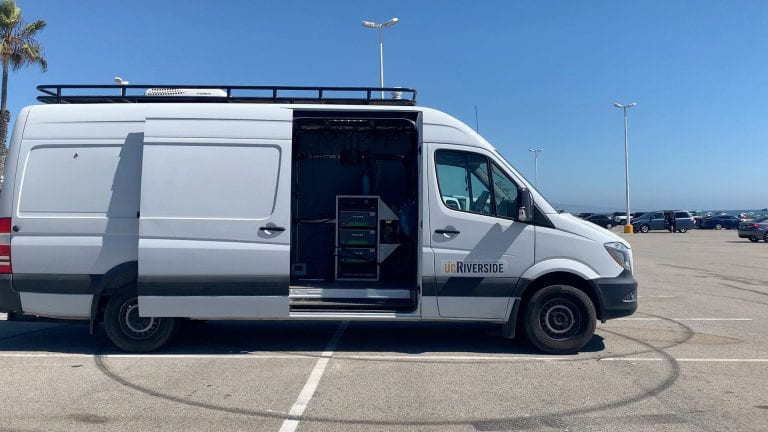 At the height of the COVID-19 pandemic in 2020, UCI Earth system science researchers and their collaborators at UC Riverside drove a mobile lab around Southern California to collect air samples. They found a significant drop in carbon dioxide emissions on the region’s freeways during that time, but the decline soon rebounded as more people took to the roads in the summer of 2021.

Irvine, Calif., Dec. 14, 2022 – The COVID-19 pandemic changed the world, including how people used their cars. In a place where freeways, traffic and smog are ubiquitous, Southern Californians drove far less during the pandemic, and that change in behavior resulted in a massive decrease in carbon dioxide greenhouse gas emissions, according to new research published by scientists from the University of California, Irvine.

“We observed CO2 reductions of about 60 percent in 2020 compared to 2019, showing that the changes in traffic drastically reduced fossil fuel emissions during the pandemic,” said Cindy Yañez, a Ph.D. student in the UCI Department of Earth System Science and the lead author of the AGU Advances study that details the findings. “But emissions rebounded to pre-pandemic levels by July 2021.”

Yañez and her team drove a mobile lab that belongs to the lab of Professor Francesca Hopkins of UC Riverside – a UCI alumna – around Southern California freeways during pandemic months to measure how CO2 concentrations were changing. They also collected plant samples with assistance from a network of community scientist helpers across the state.

Plants, Yañez explained, absorb CO2 during photosynthesis and incorporate it into their tissues, recording a snapshot of local levels of fossil fuel inputs in the process. “The plants are good for the very local signal,” Yañez said.

Having such region-specific emissions data helps paint high-resolution pictures of how well a city is reducing greenhouse gas emissions as the world struggles to mitigate the impacts of human driven climate change.

“What was really interesting was that, in 2021, the changes were very spatially variable,” said Yañez. “Even within the same cities we would see some plants that showed an increase in fossil emissions from 2020 to 2021, and in other places it stayed the same or even decreased. That’s probably related to how different people’s responses were to the reopening of the economy: Some continued to work from home, others went right back to work.”

“Say we have an incentive to sell a lot of electric cars to reduce emissions,” said Claudia Czimczik, UCI professor of Earth system science. “Then you expect a certain emission reduction from selling all these kinds of cars. But let’s say the people who do most of the driving are not the ones buying all these cars for maybe socioeconomic reasons. This is a technique that allows you to independently verify the impacts of these activities.”

Now that they’ve shown their method can work, Czimczik explained that she wants to start forming collaborations with regional policymakers so cities can use their carbon dioxide measurement methods to inform their decision-making.

“I think we can be a part of that energy transition and decarbonization push, and this is a first step,” said Czimczik.

UCI’s Brilliant Future campaign: Publicly launched on Oct. 4, 2019, the Brilliant Future campaign aims to raise awareness and support for the university. By engaging 75,000 alumni and garnering $2 billion in philanthropic investment, UCI seeks to reach new heights of excellence in student success, health and wellness, research, and more. The School of Physical Sciences plays a vital role in the success of the campaign. Learn more at https://brilliantfuture.uci.edu/[areas to support].

About the University of California, Irvine: Founded in 1965, UCI is a member of the prestigious Association of American Universities and is ranked among the nation’s top 10 public universities by U.S. News & World Report. The campus has produced five Nobel laureates and is known for its academic achievement, premier research, innovation, and anteater mascot. Led by Chancellor Howard Gillman, UCI has more than 36,000 students and offers 224-degree programs. It’s located in one of the world’s safest and most economically vibrant communities and is Orange County’s second-largest employer, contributing $7 billion annually to the local economy and $8 billion statewide. For more on UCI, visit www.uci.edu.