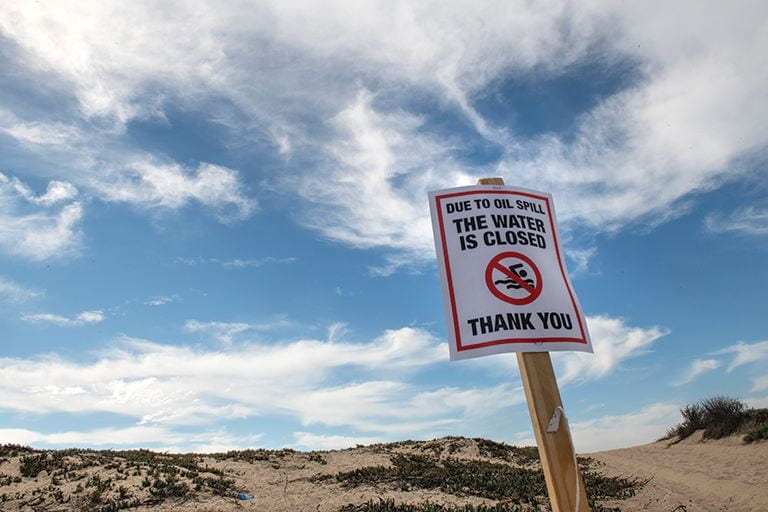 The process is about as low-tech as it gets. Standing on the Newport Pier, Melissa Brock slings a plastic bucket tied to a rope over the side, drops it below the ocean surface to fill it with chilly seawater, and begins the muscle-straining task of hauling the sloshy load back up. Then she and fellow Ph.D. student Joana Tavares carefully pour the water into small containers.

Back in two labs at UCI, the marine scientists begin their high-tech analysis. They and their lab leaders and student colleagues peer into powerful microscopes to look at organisms too small for the human eye to see and perform DNA extraction to detect bacteria and viruses. They also search for nutrients and contaminants such as hydrocarbons.

Early last fall, Brock and Tavares had more than enough on their plates as they toiled on their doctoral dissertations, with Tavares planning to graduate with a Ph.D. in Earth system science in November 2022 and Brock expected to earn her Ph.D. in ecology and evolutionary biology in spring 2024.

But when a pipeline break in early October leaked thousands of gallons of oil off the coast of Huntington Beach, they added a massive undertaking to their already crammed schedules: the newly formed Southern California Oil Spill Project at UCI.

The effort involves analyzing the composition and health of phytoplankton and other microorganisms following the 25,000-gallon oil spill and contrasting them to samples collected over the last decade by UCI students at the Newport Pier and other spots along the Orange County coast. By comparing the new samples, as well as ones that will be harvested after the oil spill situation has played out, to that 10-year dataset, Brock and Tavares hope to shed light on the effects of oil spills on the tiniest forms of marine life.

“When most people picture an oil spill,” says Matthew Bracken, UCI professor of ecology and evolutionary biology, “they picture cute and feathery and fuzzy animals like birds and sea otters covered in oil – that’s the macro scale.

“But what Melissa and Joana are doing is digging into the microscale processes that we don’t have a good handle on,” he continues. “There’s this entire food web of phytoplankton and other microbes that underpins everything from salmon to crab to herring to whales, and yet we can’t see them. And if we can’t see them, it’s hard to figure out how something like an oil spill is going to impact them.

“An oil spill has the potential to take the entire bottom out of the food chain and cause the system to collapse if these microorganisms are affected.”

Since the oil spill, Brock and Tavares have increased the frequency of their sampling trips to the Newport Pier to three times a week.

They don’t have any final results yet because they and their UCI colleagues are still in the early stages of analyzing the various samples. Their research also involves determining how microorganisms degrade the oil by consuming it, adding to the array of natural processes (wind, waves, the sun) that have the same effect.

“An oil spill has the potential to take the

entire bottom out of the food chain and

cause the system to collapse if these

“We’re all quite amazed at this,” says James Bullock, dean of UCI’s School of Physical Sciences, of the women’s seawater research. He hosted a webinar on Earth Day this year, April 22, in which Brock and Tavares were the stars of the show.

For an hour – as they shivered under their jackets on a cold and breezy spring afternoon – they patiently described their work and how they became fast friends and colleagues when both separately asked their professors if they could start collecting samples the Monday after the oil spill. “Within 10 minutes,” says Brock, who along with Tavares is passionate about applying research to understand the effects of global climate change, “we knew we’d be doing this. It took some creativity and trust, but here we are. It worked out.”

A Blueprint for the Future

The Southern California Oil Spill Project is the latest example of UCI’s long track record of studying marine biogeochemical cycles. Since 2015, Martiny has been running UCI Oceans, which involves scientists from multiple schools, especially the School of Physical Sciences and the School of Biological Sciences. The initiative was created to tackle pressing offshore and onshore environmental concerns and investigate questions on both the local and global scale.

The Earth Day webinar also featured a representative from The Henry Samueli School of Engineering, Christopher Olivares, an assistant professor of civil and environmental engineering who studies environmental biotechnology and pollutants.

He arrived at UCI a few months before the oil spill happened and has been taking samples from Brock and Tavares and running them through a spectrometer to look for the presence of long-chain polycyclic aromatic hydrocarbons, a class of chemicals that occur naturally in coal, crude oil and gasoline. “This has been an exciting way to get started at UCI,” Olivares says. Also pitching in on the Southern California Oil Spill Project is UCI alumnus David Valentine, professor of Earth science and biology at UC Santa Barbara’s Marine Science Institute. He advised Brock and Tavares on how to properly collect samples.

“Professor Valentine was just fantastic,” says Tavares, who earned an undergraduate degree in oceanography at Brazil’s Federal University of Rio Grande and a master’s degree in marine studies at the University of Delaware.

She believes the project will serve as a blueprint for future marine research into oil spills: “Someone else in a different location that’s dealing with an oil spill can take these steps, these protocols that we put together, and then reproduce them.”

“Our advisors and labs have been incredibly supportive,” Brock adds. “They also provide a lot of opportunities for undergraduates to get involved. They recognize this project’s relevance to the local community, and I think that’s incredibly impactful.”