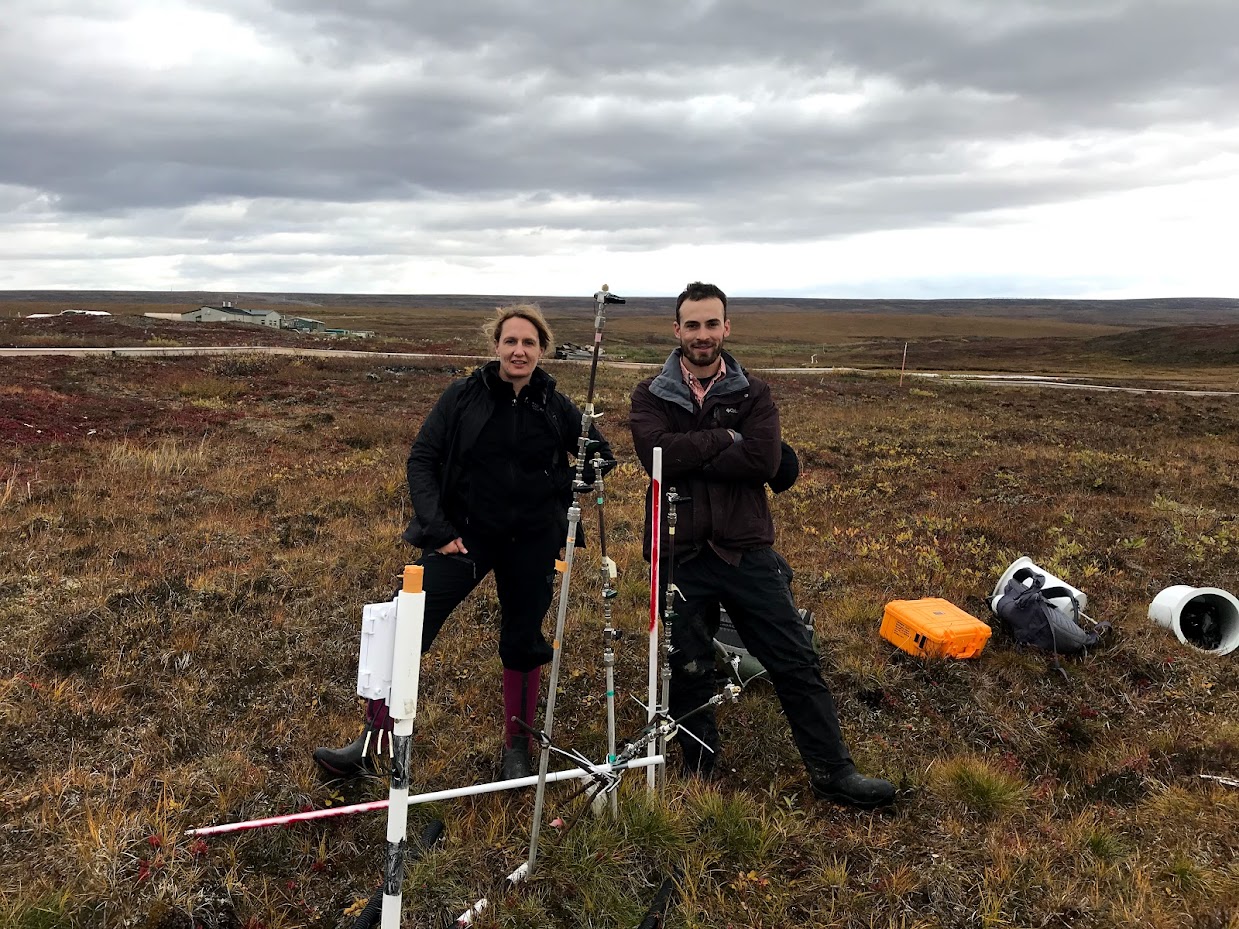 Irvine, Calif., March 24, 2022 — The Arctic is warming along with the rest of the planet, and as this is happening, its permafrost – perennially frozen arctic soil that holds a lot of trapped organic matter from dead plants – is thawing. As the permafrost thaws, the organic matter it holds is thawing, too, and this is opening the door for microorganisms to decompose that matter and, in the process, release climate-warming greenhouse gases like carbon dioxide and methane into the atmosphere.

In new research published today in the journal Geophysical Research Letters, a team led by scientists at the University of California, Irvine report for the first-time direct measurements of the gases emitted from permafrost during the fall and winter months – measurements that can help fill in gaps in permafrost emissions estimates that climate scientists have until now missed.

“It’s the first time we are able to look at the carbon sources that fuel carbon emissions during the fall and winter periods,” said Claudia Czimczik, a professor of Earth system scientist at UCI who’s the senior author of the new study.

The work, Czimczik added, stands to overturn beliefs about permafrost emissions, namely, that the microbes that decompose the organic matter and emit greenhouse gases are only active in the spring and summer months. “We didn’t appreciate how active microbes can be in active frozen soils,” she said.

Not only are microbes active during the fall and winter, but they’re also decomposing organic matter that’s often hundreds – if not thousands – of years old. Before, it was thought that emissions primarily come from the decay of recently deceased organic matter that came from plants that grew and died during the spring and summer months.

What this means, explained Shawn Pedron, who’s the study’s lead author and a postdoctoral researcher at UCI in Czmiczik’s lab, is that microbes can thrive and continue emitting gases by decomposing vast stores of ancient organic matter as well. This dispels hopes that the fall and winter months might offer a reprieve from Arctic permafrost emissions; and with climate change making the winter less harsh, emissions from Arctic latitudes only stand to amplify as the years unfold.

The discovery was made possible because of a new tool designed by Czimczik, Pedron and their collaborators. It was first deployed in Alaska over a period of two and a half years from 2017 to 2019, and allowed for the year-round, direct measurement of greenhouse gas emissions from permafrost.

“This tool allows us to continuously monitor soil CO2 production,” said Pedron. “We see that what’s actually occurring is a much more dynamic picture, where microbes are accessing different food sources at different times of year.”

The team did their sampling at the National Science Foundation’s Toolik Field Station in northern Alaska, and now they are in the process of deploying their new tool across many Arctic locations to see if they can paint a broader picture of fall and winter greenhouse gas emissions from permafrost.

“The next step is to use this new tool to investigate how carbon vulnerability is influenced by its distribution over the landscape,” said Czimczik, who described how thawing permafrost could emit the same amount of carbon as has already emitted into the atmosphere because of human land use change around the planet –  about 240 gigatons by 2100.

Jeffrey Welker of the University of Alaska, Anchorage contributed to this study by helping develop ideas in the early stages of the new sampling system’s development, and Toolik Field Station staff provided logistics support via swapping and shipping of samples. The team worked with Amanda Young, who’s a Spatial and Environmental Data Center Manager, and her predecessor, Jebidiah Timm. Funding came from the National Science Foundation Office of Polar Programs.

About the University of California, Irvine: Founded in 1965, UCI is the youngest member of the prestigious Association of American Universities and is ranked among the nation’s top 10 public universities by U.S. News & World Report. The campus has produced five Nobel laureates and is known for its academic achievement, premier research, innovation and anteater mascot. Led by Chancellor Howard Gillman, UCI has more than 36,000 students and offers 224 degree programs. It’s located in one of the world’s safest and most economically vibrant communities and is Orange County’s largest employer, contributing $7 billion annually to the local economy and $8 billion statewide. For more on UCI, visit www.uci.edu.

About the UCI’s Brilliant Future campaign: Publicly launched on October 4, 2019, the Brilliant Future campaign aims to raise awareness and support for UCI. By engaging 75,000 alumni and garnering $2 billion in philanthropic investment, UCI seeks to reach new heights of excellence in student success, health and wellness, research and more. The School of Physical Sciences plays a vital role in the success of the campaign. Learn more by visiting: https://brilliantfuture.uci.edu/uci-school-of-physical-sciences/.