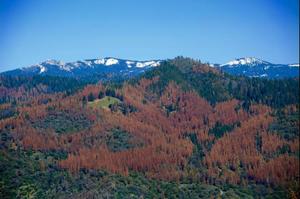 To deal with high temperatures between 2012 and 2015, trees in the Sierra Nevada drew lots of water from the soil -- more water than rain or snow could replenish.

Between 2012 and 2015, very little rain and snow fell on California. Aquifers shrank and the land dried out. In 2015 and 2016, the worst drought in a century hit. Temperatures soared. The combination of stressors was too much for the trees of the Sierra Nevada -- large numbers of trees died.

New research suggests the loss of deep-soil water best explains why the mountain range's trees were unable to withstand the drought and heatwave.

"In California's mixed-conifer mountain forests, roots extend from five to 15 meters deep, giving trees access to deep-soil water," Michael Goulden, a professor of Earth system science at the University of California, Irvine, said in a news release. "This is what has historically protected trees against even the worst multi-year droughts."

In the wake of the severe drought conditions in 2015 and 2016, aerial surveys by the U.S. Forest Service revealed the loss of mature pines and other conifers throughout the Sierra Nevada range. Analysis of the aerial observations revealed the majority of tree losses occurred at lower elevations.

Researchers conducted field studies to better understand the factors that contributed to the forest die-off. In places where the most trees died, scientists found denser pockets of vegetation. Researchers estimated that the hot, dry conditions caused trees to draw more and more water from the soil. Trees are able to cool themselves through evapotranspiration, the evaporation of moisture from their leaves.

After several years of accelerated evapotranspiration, the trees were left with little or no deep-soil water reserves. The trees dried out their lifeline trying to keep cool between 2012 and 2015. When the extreme drought and heat hit, they were unable to run their internal AC unit.

Researchers suggest the pattern revealed by the new study, published this week in the journal Nature Geoscience, is likely to repeat itself as the planet continues to warm.

"We expect climate change to further amplify evapotranspiration and ground moisture overdraft during drought," said Goulden. "This effect could result in a 15 to 20 percent increase in tree death during drought for each additional degree of warming."